Over the years, we've done alot of playing with "Check-Out Clubs," special stealth (passive) programs. These clubs encourage frequent visits back to the library even if there isn't any program tempting kids in. And it encourages continued robust check-out: if kids check out, they get to do a "thing". The "thing" most likely adds to a "group build" that is eye-catching and a fun incentive for kids to add to.

We run these clubs during slower times when kids are less frequently in the library or we are on program breaks. When are those quiet times? They can be almost anytime of the year. For us, it's been:

Our other goal with the clubs is to make sure whatever we plan is exciting and interesting for the kids. By and large, they have really worked for our community and we've been super pleased with the results - both the enthusiasm of the kids and the resulting check-out.

Free-quent Reader Club was created based on the concept of frequent flyers earning bonuses and air miles. Kids in this September/October club would earn a book. We also used this club for secondary goals like encouraging kids to bring their cards with them or increasing attendance at a specific program by offering double stamps. 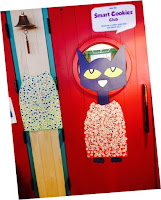 Smart Cookie Clubs have been popular doldrums December-January events. Each year we changed the character that kids got to add cookies to - Pete the Cat or Elephant and Piggie. We used our large storyroom doors as bulletin boards and kids added a cookie each time they checked out.

Ice Cream Club is the new model of Smart Cookie Club. We used it this year in January and February when we are doing massive K and 2nd grade tours and cut back our programming to accommodate these intensive eight weeks of tours. Kids who checked out could add an ice cream scoop to our "build". Sweet!

Fire Up with Reading Club - we ran this September club to culminate during Fire Safety Week in October. Each time kids checked out they could fill in a raffle slip to win a "day with the firefighters." It was great working with the Fire Dept on this one and we had good participation.

Lego Check-out Club, Bryce's long held dream that fruitioned two years ago, was uber the first year and even better the second year when we lost the bags and just handed out the legos and had a new desk big enough to accommodate the organic build (rather than being closed away in our porthole). It has made December a much sought after "return to the library and check-out materials" month.

Back Pack Buddies - staffers were interested in having a brand new backpack raffle for kids in August. We figured rather than our usual scavenger hunts, it would be fun to get kids excited about school and the possibility of winning one of six fully-loaded backpacks. Kids who checked out could enter a raffle to win a backpack and put their name on a pencil to add to our "build." THIS was a big one!

Some of these clubs were one shot deals or needed some tweaking. Backpack Buddies was far more intensive than we realized - not just because of high participation but also coinciding with a time of short-staffing, SLP wrap-ups and general craziness. Our Undercover Spy Club started off with a bang - we handed out beaucoup spy buddies to kids to explore the city and report back but had very few return visits. Our Firefighter winner had to cancel a couple of the dates to go to the fire station making it far more complex for the firefighters. All of these were learning experiences and just gave us more ideas on how to run our next club a little better!

We've had far more ups than downs doing these clubs. As passive programs they bring in added excitement and return visits and better check-out. What's not to love?

Posted by Marge Loch-Wouters at 10:01 PM