Emergency Emergency - Give Me a Program 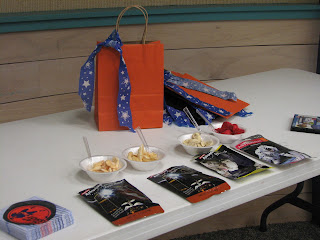 Due to a staff emergency on the day of a program, we were faced with needing to hatch a new program with two hours notice.  Did we have to sweat?  Not too much.  We just jumped in and created one.


We are running a twice-a-week series over five weeks for school-agers called Warp Speed Space Adventures. Since we don't advertise what we do in each session except in general terms for the whole series, we weren't forced to stick with any particular program.  So what did we do?

A couple of staffers put our heads together for ten minutes and - voila! We decided to take a space trip that ends in a crash landing. We grabbed a DVD off the shelf,  "A Traveler's Guide to the Planets", a cool National Geographic entry that has great pictures and special effects and queued up the Saturn sequence. Our teen volunteer was ready to flick lights on and off crazily at a signal to simulate a crash.


When kids entered, we gave them each a "space sickness" bag (a gift bag with star crepe paper tied around it) and talked about our coming space journey.  We let them know they could use the bag if they felt sick. We mimed putting on our spacesuits and why we needed them and then turned off the lights. After about 10 minutes we "crashed" onto one of Saturn's moons.  We checked to make sure everyone was ok. Those who indicated bumps or bruisers got a "space bandaid" (a planet sticker- once we started handing those out, many more injuries were reported).

We decided our moon was hot and dry so we would need shelter and robot help.  Thanks to Pinterest, I had found some great robot cards that we printed out and cut. Kids could choose a robot helper to be their friend and companion for their survival. Then we broke out the Legos and let kids build shelters until we could get our spaceship fixed.  And we still had some astronaut freeze dried food and broke that out for our survivors. Kids -and parents - really enjoyed themselves.

All programs don't need uber thought and planning to create fun. And sometimes what happens because of an emergency proves to be the most fun of all.

Posted by Marge Loch-Wouters at 9:59 AM